Sometime last year, I wrote about a time when I screwed up majorly at work, and how we don’t talk about that enough. And in that same vein, I am here today to tell you that Instagram is a lie.

Many of you, or approximately 20 of you at last count anyway, saw the picture I posted earlier today of my farmers market haul and the beginnings of my vegetable stock. With cocktail in hand, I must confess to you all that mere hours after that photo was taken I tasted said vegetable stock and found that it was extremely bitter. Like, un-usably bitter.

The internet said to try carrots to sweeten it up, but that didn’t work particularly well, and so it was with a heavy heart that I disposed of a full pot of stock and the vegetable scraps I’d been building up for months. Trying to food better one Sunday at a time, I say? Psh. 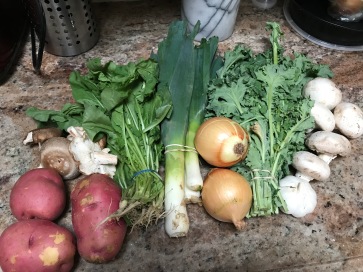 I’ll admit I reacted to this failure pretty well. I spent the next half an hour googling all of the things that could have made the stock so bitter, reassured myself that I still had some chicken stock left and a whole chicken carcass that I could use to make more in the very near future, and stared at the photogenic farmers market haul half of the photo. And least now I know that you really shouldn’t put any cruciferous vegetables in stock (no broccoli, kale, cauliflower, Brussels sprouts, cabbage etc.), and frankly I had quite a few.

Of course this wouldn’t have been worth a blog post if I had reacted completely rationally. What did this do to my “trying to food better” claims, what about all those scraps I had to throw out? What about the farmers market haul which was primarily things like kale and mushrooms and therefore unlikely to contribute to future stock projects? What does “trying to food better” even mean if you can’t get stock right?

Calm your shit, Sara. This is what happens when former straight A students try new projects.

By some estimates, up to 40% of the food in this country goes uneaten. Additionally, our corporate farm culture has greatly diminished our biodiversity, takes unbelievable amounts of energy to produce and transport subpar stuff, and has in countless ways distorted our diet. And while some of us feast on out of season vegetables that crossed oceans to get to us, much of our most vulnerable populations live in food deserts created by grocery stores that flee for “greener” pastures.

I love food – I love eating it, I love cooking it, I love reading about it and watching things about it (Hey Netflix, GET SOME ACTUAL COOKING SHOWS) and traveling places to get it and trying new and increasingly stranger variations of it. And even I have those days where I’m like being a human is so hard you have to just keep buying food and cooking it and then eating it and you have to come up with all these variations and it takes so much time and then you STILL have to do the dishes. Food is the foundation for a lot of our culture. There is, as Anthony Bourdain says, nothing more political than food. Who makes it, who has access to it, where it comes from – these are questions that drive not only our own individual experiences, but geography and politics and violence around the world.

I’ve been trying to be better. I’m going back to my local farmer’s market every week, and soon I’m going to try buying meat and cheese there as well as produce. (I’m aiming for vegetarian this week because last week was a gluttonous, carnivorous fest in honor of my Dad and Kelly and I all being in the same hemisphere). We can all be a little better about our food, for our own sake’s as well as the planet, but I know can do that a lot easier than others because of health and wealth and a million other kinds of privilege, and I have a responsibility to keep making that choice. So I saved the empty bags and I’ll just keep filling them up.

And try to remember to keep the kale stems out this time, will you Sara?

This rant brought to you by Barbara Kingsolver’s Animal, Vegetable, Miracle, which while occasionally a little tone deaf is a pretty lovely introduction to the pleasures and politics of food.

I’ve been thinking a lot about money lately. What I have, what I don’t have, what I’d like to have. Why I choose to spend money on certain things when I don’t know that I really want them. How to prioritize better. How I want to make money. Why I can’t just have money. I can’t quite figure it out- all I really want out of life are food, travel, and books. This shouldn’t really be that hard do and yet I have all these cravings I can’t satisfy. Maybe when I say that I’ve been thinking about money, what I really mean is that I’ve been thinking about food, and books, and travel. I do that a lot.

Eventually in Supernatural, Sam and Dean will reach the nexus of good and evil, when the best thing they can do for the world is hang up their bloody demon-killing knives and their holy oil, and live that apple pie life that they keep trying and failing at. They just play at too high a level. When Death is on your speed dial, when both Heaven and Hell have turned you out, when Lucifer seems a paltry villain compared to your current adversaries, your fight is probably going to do more harm than good.

When all that’s true, and you’re still willing to bring the world to its knees to save your brother, when his beating heart and breathing lungs are still your top priority, well then you know your battles are going to do more harm than good.

It was not signed, and said nothing of where he was going or when he would be back or why he must leave. Still, Ned’s father knew all the same.

The sea meant I love you.

The sea meant I will one day return.

In his mind’s eye he could see his son – the boy, the youth, the man – standing in the midst of limitless space. Water, wind, sky. The core of the earth. The slice of the mountains. The roof of the stars. The pulse and rhythm of the ocean’s ceaseless waves.

Ned’s father pressed the note to his heart. He closed his eyes. Tasted his own saltwater tears.

–The Witch’s Boy by Kelly Barnhill

Music was the offering you gave to the empty places you created. I wonder if it still is. I wonder if the price is still too high.

We play a lot of Disney music in the store I work in. And I always find myself feeling weirdly guilty when “Do You Wanna Build a Snowman?” or “For the First Time in Forever” from Frozen come on. I over identify with Elsa, closed off and too cautious and too protective. Kelly is Anna, my red headed, messy, determined sister. The parallels aren’t perfect, for reasons both subtle and obvious, but still when Anna starts singing about missing Elsa, who is hiding from her, or about her loneliness, I get a little secondhand twitch.

When I told Kelly that she said, “Well that’s cause you’re Dean.”

There will be peace when we are done, but we aren’t done yet.